PSR’s Visionary Leaders Awards ceremony and reception, now in its fourth year, recognizes individuals and organizations for their exemplary efforts in advancing nuclear weapons abolition and/or addressing environmental risks to human health, including the catastrophic consequences caused by climate change, through collaborations that strengthen the PSR mission. PSR works to address the gravest threats to human health and survival– nuclear weapons and the climate crisis—in order to achieve a healthier, safer and more peaceful world.

At our 2019 Visionary Leaders Awards, PSR was proud to present Dr. Helen Caldicott with a Lifetime Achievement Award in recognition of her leadership of PSR during the 1980s. Dr. Caldicott, a prominent Australian pediatrician, has devoted more than half of her life to an international campaign to educate the public about the medical hazards of nuclear weapons and nuclear power and changes we must make in human behavior to stop environmental destruction. During her time living in the United States, she played a major role in reviving PSR and serving as its president (1978-1983). She also founded several organizations, both here and abroad, including WAND (Women’s Action for New Directions). Dr. Caldicott currently divides her time between her home in Australia and the United States and was named one of the most important women of the 20th century by Ladies’ Home Journal.

Our other impressive honorees received recognition for their vital advocacy to advance nuclear weapons abolition and/or combat the climate crisis.

During her 10 years leading Oregon PSR, Kelly Campbell has kept the chapter strong, focused and visionary. Under her leadership, the chapter’s current environment and health efforts address the prevention of any new fossil fuel infrastructure or transport through the Northwest region. This is a great example of how the fight against fossil fuels can be carried out in states that do not frack for gas or oil or mine and burn coal. The program is robust and ambitious and includes multiple specific efforts.

Regna Merritt has been absolutely key to the chapter’s successful implementation of these initiatives. She has represented Oregon PSR in these efforts, and she has made the chapter a leader in regional and cross-state coalitions and initiatives, where she has served not only as PSR’s representative but as a key individual leader. She has also been instrumental in ensuring that low-income families and communities of color receive their fair share of the benefits of Oregon’s new renewable energy ecosystem. This insistence on successfully incorporating environmental justice and equity into the energy transition is a leading model for PSR and in and of itself deserves to be honored.

Sunrise Movement, a powerful youth-led organization, has elevated nationwide and worldwide demands for bold, to-scale solutions like the Green New Deal that uplift communities, create millions of jobs, and provide a rapid just transition to a clean, safe renewable energy economy for fossil fuel workers. With their core emphasis on social justice and on centering impacted communities, Sunrise has proved that the winning model for climate action is demanding concrete commitments from powerful decision-makers and creating massive public support for impactful policies rooted in justice and equity. Dyanna Jaye, Co-Founder and Organizing Director, accepted the award on behalf of the Sunrise Movement.

Prior to the VLA ceremony, PSR hosted a symposium featuring women experts who discussed the link between nuclear weapons and climate change and the ways in which justice forms an essential aspect in both issues. The symposium began with a keynote address from Dr. Caldicott, followed by an all-women panel of experts: Lindsay Harper, Executive Director, Georgia WAND; Catherine Killough, Advocacy & Leadership Coordinator, Women Cross DMZ; Jacqueline Patterson, Director, Environmental and Climate Justice Program, NAACP; and Kelly Campbell, Executive Director, Oregon PSR. The panel was moderated by documentary filmmaker Heidi Hutner, a professor at Stonybrook University.

On the subject of the climate crisis, Dr. Caldicott remarked, “Being health professionals, it’s important for us to realize that our planet is our patient, and it’s in the intensive care unit. We’re doctors to a dying planet, and we have a job to do.” Read more details about the Symposium in the American Public Health Association’s Public Health Newswire.

Gender justice was a key element of the conversation about building progress. Jacqueline Patterson noted, “So many women are leading on innovative solutions, bold solutions, and on solutions that are going to get us to where we need to be—both in terms of reducing the proliferation of climate change and also surviving the already-existing impacts that we are seeing.”

Catherine Killough underscored the connection between nuclear weapons issues and climate change issues: “The intersection of climate change and nuclear weapons is so important because we really need a bold re-imagining of what security means—because our security should not come at the expense of our basic needs or ecological sustainability. …We need to think about how we invest in our military and how we can redistribute those resources for things like actualizing the Green New Deal, which will make us more secure.”

Kelly Campbell emphasized the success Oregon PSR has had working alongside impacted communities, “really developing authentic relationships with communities experiencing climate injustice and environmental injustice and leading from there. We’ve seen in Oregon that we were then able to have the conversations about, ‘How do nuclear weapons fit in with this?’”

Later, she added, “Now, we are in a relationship where those folks are supporting our work around nuclear abolition and really coming at it from different perspectives, with a lot of women of color who have been involved in those [other social justice] movements really understanding and feeling comfortable working on nuclear issues as well.”

Lindsay Harper noted that empowering communities is a false premise. “At Georgia WAND, we don’t ‘empower’ folks. You can’t give anybody power. It’s really about helping folks realize their own power. It’s about self-determination. Really work with folks to own the power they already have. That’s the solution.”

Read our interview with Sunrise Movement’s Dyanna Jaye, who accepted the award on behalf of the organization, here.

Watch a video of the symposium here.

View photos of the symposium and the awards ceremony below. 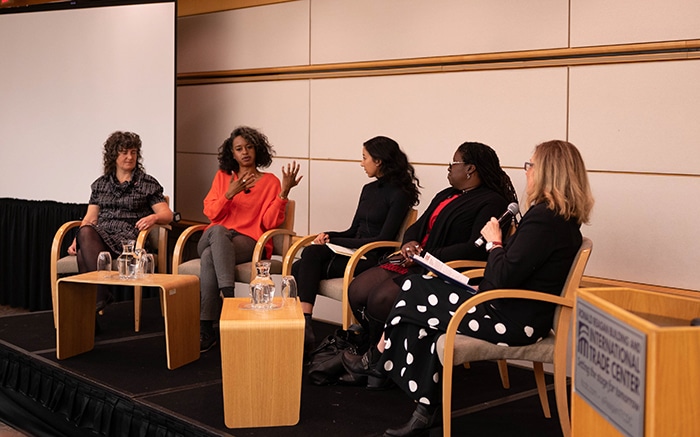 Celebrating the ban treaty’s “Banniversary” around the United States

January 31, 2023
Members of Prevent Nuclear War Maryland celebrated the anniversary of “Entry Into Force” of the Treaty on the Prohibition of Nuclear Weapons by bringing roses...
More

January 30, 2023
PSR's My Green Doctor program is the focus of a free 40-minute online CME program offered by the American Medical Association to any physician, not...
More
Scroll To Top